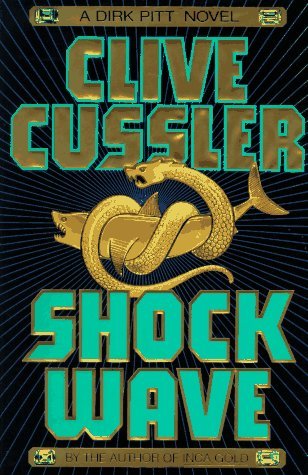 Clive Cussler is known for his somewhat epic prologues that set the historical stages for his various novels, specifically those that follow the escapades of his modern-day adventurers like Dirk Pitt, Kurt Austin, or the crew of the Oregon. As far as I can recall from the recent adventures I’ve read, the prologue to Shock Wave has been the most exciting, fit with a ship wreck, a torturous lost-at-sea scenario, murder, cannibalism, and finally a brief history of survival. I was gripped with the story from the very start.

As the story progressed, I had vague recollections of the novel’s plot—amplified sound waves that traveled through the oceans becoming a deadly “acoustic plague” when converging—but the rest was as new to me as it had been the first time I read the book, probably nine years ago. That’s both a good thing and a bad thing, I suppose.

The family of villains was perhaps the most unmemorable I’ve met thus far in my review of the Dirk Pitt novels: a 100% corrupt father who at the same time has been a well-respected businessman dealing in gemstones, and his three, vastly different daughters. One’s a sex-magnate who catches even her father’s eye. One’s apparently an Amazonian beast, albeit a sexy one. And the third was ironically ostracized from this family of weirdos, in part, for having a set of twins our of wedlock.

Dirk Pitt falls head-over-heals for the third sister, which struck me as very strange as well, since he had just been chatting with Congresswoman Loren Smith about marriage. Why the diversion? Already I can’t understand his incredible dedication to Summer, whom he met in Pacific Vortex and lost like ten minutes later. Why would he need yet one more woman on his conscience before he settles down with Loren? I don’t get it, and I think that overall it’s more of a distraction from the hero (and for the hero) than anything else.

I really enjoyed this book more than I can recall from the last read, especially for the long lost-at-sea experience Dirk, Al, and Mave were forced to endure. I enjoyed the employment of several survival techniques that I’ve read in some survival books recently, and of course the ultimate victory they attain at great personal loss. I also especially enjoyed the calling out of the Debeers diamond cartel for their decades of propaganda and brainwashing over the “intrinsically useless” chunks of shiny carbon that women love so much. I had just finished watching the first episode of “Adam Ruins Everything” which does essentially the same in a shorter, more humorous way. Very interesting.

Gallery | This entry was posted in Action, Book Review, Fiction. Bookmark the permalink.