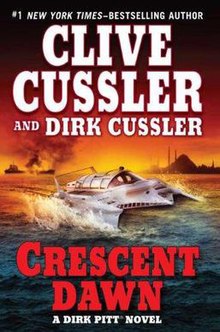 As I make my way through the Dirk Pitt series for a second time, my intent is to review each installment in the context of the overall story arch. I love the Dirk Pitt story arch, obviously, and how it occasionally intermingles with that of the NUMA Files and the Oregon Files and others. Occasionally, however, I come across stories that simply lack the appeal of most. Crescent Dawn happens to be one of those stories.

For whatever reason, I just couldn’t get into this one. Perhaps it was the threat that the fictional heroes would discover the bones of Jesus, and thus I’d find myself being entertained by heresy. Perhaps it was the shameless attempt at equalizing Dirk Pitt and Jr. by introducing the younger’s own murdered “first true love”, an Israeli archaeology detective. Perhaps it was that I had just finished 20 Dirk Pitt novels straight and I needed a break! Whatever the reason, I started this book seven or eight months ago and only this week finished it.

In Crescent Dawn, we get lots of Dirk Pitt and Lauren Smith early on as they run from bad guys in Istanbul. It hearkens back to the olden days a bit, but not really. Pitt is older and you just don’t get the sense that he’s up to his old shenanigans. Young Dirk, on the other hand, plays the ladies as well as his old man had done three or four decades before. This is understandable from an author’s point of view, yet shameless from a reader’s point of view, once we realize that Dirk’s first true love also dies, much like his own mother did twenty novels ago.

The story follows its standard twists and turns, the villains being descendants of a lost Ottoman Empire hoping to rekindle their strength and rule the world once more—once they have the necessary ancient artifacts in hand, of course. This brother-and-sister duo wreaks havoc wherever they run, so the classic Cussler villains are as present and bold as ever. The particular artifact they seek most is “the manifest”, a mysterious document that I think tells us something about the bones of Jesus. I may have purposefully forgotten what this is all about, but whatever. I simply don’t recall. Ultimately, I think they only find his sandals, so Cussler was able to dodge that heretical bullet. For now.

In this book, it becomes abundantly clear that Clive Cussler loves his misplaced (and dangling) modifiers, but after so many novels, I think he’s earned the right to print whatever the heck he wants. Even after this book (I’m currently enjoying Poseidon’s Arrow), he’s still the most amusing adventure author I’ve found.

If you’ve ever made it through 20 books about a single character, just push through that 21st, even if it’s not all that great. The 22nd might well be worth it, and you’ve enjoyed him so much along way, he’s gotta be allowed a downer every once in a while.

Gallery | This entry was posted in Action, Book Review, Fiction. Bookmark the permalink.