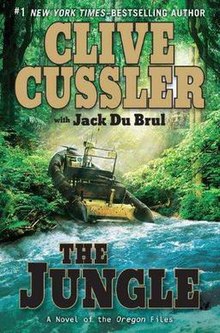 The third novel from The Oregon Files that I finished during my week in Laos was the 8th book in the series, The Jungle. Like Plague Ship, this story has some unique ingredients that makes it stand out from the rest, though it’s otherwise a pretty poor example of Clive Cussler‘s adventure prowess. Particularly, this is the first book I can recall—from any of Cussler’s series—in which a main character dies (of course Summer Pitt died in Pacific Vortex, but she only became major in the follow-up Dirk Pitt novels). Likewise, it’s the first novel where a brand new main character is introduced out of the blue, at least since Trojan Odyssey when we first meet Dirk and Summer Pitt.

The majority of this tale takes place in Burma, though there are portions also in Iraq and inside the USA. Overall, the plot is pretty forgettable, so I won’t get into it here. It’s a convoluted story involving blackmailed victims and seemingly wrong-place, wrong-time misfortunes for all involved.

But early on, during one of the raids against a group of mercenaries by a collection of The Oregon crew, one character in General Operations, Jerry Pulaski, is shot and killed. It’s a saddening affair for all involved (though Juan and Max find occasion to laugh afterwards), and it does take the reader by surprise.

This sudden opening in their crew, however, seems like a perfect opportunity for Juan to interview, train, and eventually hire an American soldier they had just recently happened to rescue from terrorists in Iraq, a Mr. MacD Lawless III. This coincidence seems too hard to believe, and thankfully it is. Lawless is in fact serving as a double-agent for the enemy who has blackmailed the soldier by kidnapping his daughter back in Colorado. Juan berates him, helps save his daughter, and eventually lets his offer for Lawless to join The Oregon crew stand. That was a bit surprising (considering Juan’s hard-nosed character and the deep trust that exists among the crew of the Oregon), yet also expected (considering the melodrama of modern fiction).

With such a forgettable plot, this book fits well within my “least-favorite” list of Cusslers. Since something needs to fit into the bottom, I’m not too downtrodden. But since this entry now completes my review-list of all ten Oregon Files, I now need to start looking for a new favorite series. Grr.

1 Response to Book Review: “The Jungle” by Clive Cussler with Jack du Brul (2011)